Posted on November 25, 2014 by asocialexperimentblog

Okay, enough procrastination. This has got to be the most difficult one for me to write but sometimes you just have to get it over with or it will haunt you.

Heather, Catherine’s younger sister, is played by beautiful Nicole Gale Anderson, who really does her very best to make something of her.

But, I am sorry to say that I simply cannot abide with portraying 20-something women behaving as 13-year-old girls. They might exist somewhere in the real world (possibly a psych ward), but do we really have to be tortured with them on TV. We are talking about a woman who is old enough to have sex in every room of her sisters flat, yet somehow throws a temper tantrum worthy of a 3-year-old every time she is not the center of attention. It is possible to be sceptical and have trust issues without bursting out in blubber all the time. 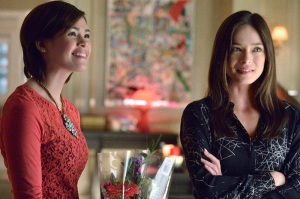 There was such a great opportunity to show how the sisters have been affected differently from losing their mother as young. Instead Heather is a caricature of a sister, even less of a friend and absorbed in self-centered baby talk most of the time. She is in no way redeemed by finally accepting her sister’s boyfriend after 2 years simply because he saved her life. That might be okay with the cop friend but not a sister.  What a waste.

Do you really think that 2 sisters who have lost their mother and live together would then have such a superficial relationship? That even after all their ups and downs a younger sister would dismiss her older sister confiding in her as bull? Everybody else are so real in this show yet Heather is wildly unrealistic. I don’t get it.

Again I have to commend Nicole for pulling it off. It must have been sheer agony to have to act that part.

Anyway, I read somewhere that she gets more screen time in season 3. I am worried that would kill the show. Unless they have reinvented her and the audience is forgiving of the 2 previous seasons of her.

I am constantly musing over what makes people tick and wanted to research it more independently on this blog. I have chosen to remain anonymous in order to conduct these experiments without interference of age, appearance, gender or connections.
View all posts by asocialexperimentblog →
This entry was posted in Characters and tagged #batb, batb writers, beasties, beauty and the beast, Catherine, Heather, Nicole Gale Anderson, story line, younger sister. Bookmark the permalink.